Many writers and scientists described virtual reality long before it appeared. We are accustomed to associating virtual reality with goggles and headsets, although the first manifestation of virtual reality refers to as early as the middle of 19th century.

The appearance of virtual reality is not an event. It is a wave of discoveries. Many people have attempted to come up with parallel universe simultaneously and independently from each other. Thus the phenomenon had arisen, which was called virtual reality much later.

Find out how VR history was made!

This is the period of the very first stereoscopic devices. They consisted of a pair of lenses through which a picture was perceived otherwise. In fact, these devices were prototypes of current 3D-glasses.A little bit later science fiction story Pygmalion’s Spectacles greatly influenced Virtual Reality evolution, predicting development direction. 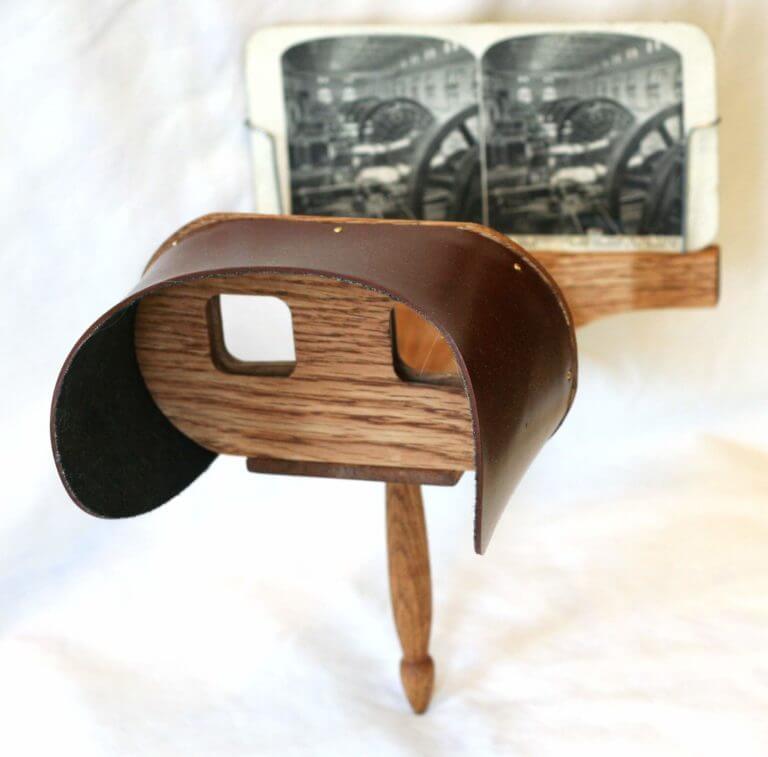 The earliest type of stereoscope was devised by Charles Wheatstone, Professor of Experimental Philosophy in King’s College (London), in 1838. Stereoscope used a pair of mirrors at 45-degree angles to the user’s eyes, each reflecting an image located off to the side.  As a result, two flat images superimposed on each other and a volume picture was created. Stereoscope made by Wheatstone was introduced the year before the first practical photographic process became available, so drawings were used.

But in 1861 Oliver Holmes created (it wasn’t patented) much more economical viewer than had been available before. The Holmes’s stereoscope consisted of two prismatic lenses and a wooden stand to hold the stereo card. It was the most spread stereoscope form of 19th century

With the lapse of time mankind has been slowly and surely creating more sophisticated ways to stimulate senses. Things really began to take off in the 20th century, with the advent of electronics and computer technology. 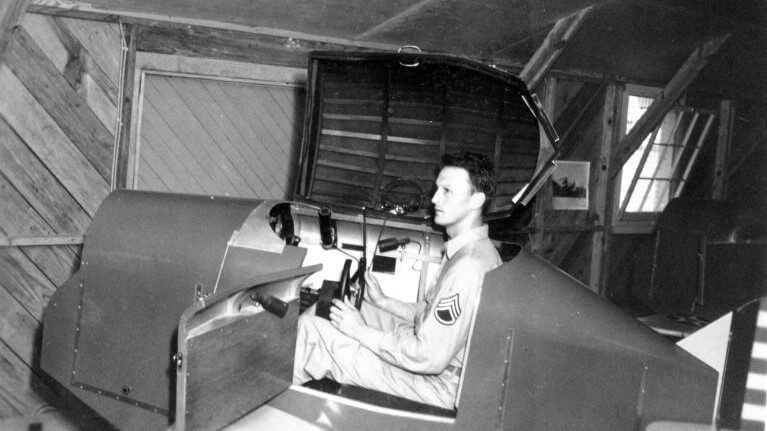 In 1929 Edward Link created the first commercial flight simulator. It was completely electromechanical and was called “Link trainer”. Flight simulator allowed safer pilots’ training. Then the US military purchased 6 such appliances. In World War II more than half a million pilots used it for flight training and improving their flying skills.

In 1935 the science fiction story by Stanley G. Weinbaum (Pygmalion’s Spectacles) describes the idea of a goggles pair that let the human experience a fictional world combine holographics, touch, taste, and smell. Literal excerpt from the book: “I build up a complex solution—do you see? I add taste chemically and sound electrically. And when the story is recorded, then I put the solution in my spectacle—my movie projector. I electrolyze the solution, break it down; the older chromates go first, and out comes the story, sight, sound, smell, taste—all!”. 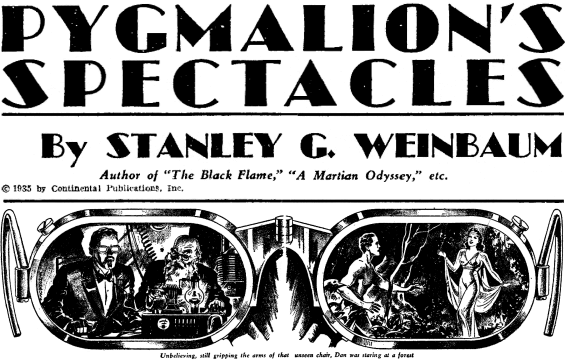 Full text of “Pygmalion’s Spectacles” you can find at Gutenberg Project. 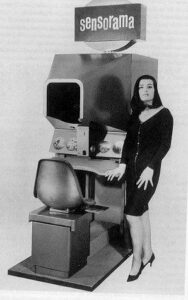 In 1962 he built a prototype named Sensorama. It was an arcade-style theatre cabinet that would stimulate all the senses including vision and sound. This mechanical device featured stereo speakers, a stereoscopic 3D display, fans, smell generators and a vibrating chair. Heilig intended to immerse man in the film fully. He also created six tiny films for this purpose. Each of them was shot, produced and edited by himself.

“Briefly, an apparatus constructed in accordance with the principles of the invention embodies a housing having a hood means mounted thereon to fit about the head of an observer. A visual image projection means is supported by the housing, and an optical means is included to direct images from the projection means to the hood. In addition to the above, means is provided to direct a breeze toward this hood, and at least one odor-sense stimulating substance is positioned to be releasable into the breeze in response to a signal from a suitable coordinating means. It is the cooperative effects of the breeze, the odor, the visual images and binaural sound that stimulate a desired sensation in the senses of an observer. For those instances where a sense of motion is desired, means is provided to induce small vibrations or jolts to simulate movement and, also, to simulate actual impacts.”

Short interview about Sensorama with its creator below: 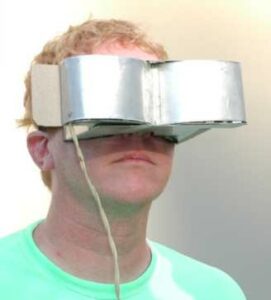 One more Heilig’s substantial invention – virtual reality HMD Telesphere Mask. It is the headset which provided stereoscopic 3D and wide vision with stereo sound with no motion tracking. 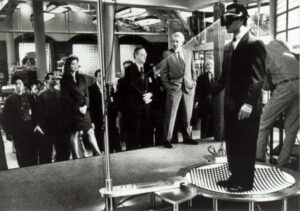 Philco Corporation designed a new helmet that used head movements to gain access into an artificial environment that was enhanced with a tracking system. Headsight incorporated a video screen for both eyes. The magnetic motion tracking system was linked to a closed circuit camera. The Headsight allows users immersive remote viewing of hazardous situations by the military. It was the first step of VR HMD evolution but it lacked computer integration and image generation.

1965 – The Ultimate Display by Ivan Sutherland

Ivan Sutherland reported the “Ultimate Display” concept that could simulate reality to the point where nobody could feel the difference from actual reality. His concept was described in such a way:

From a technical point of view it means the following:

– Computer hardware creates the virtual world and maintains it in real time.

– A virtual world can be viewed through an HMD and appeared realistic through augmented 3D-sound and haptic feedback.

– Users have the ability to interact with virtual objects in a realistic way.

Full text of The Ultimate Display: 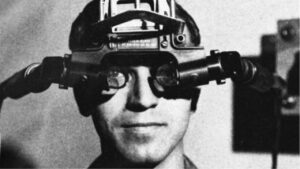 3 years later Ivan Sutherland and Bob Sproull (Sutherland’s student) created the very first VR/AR head mounted display (Sword of Damocles) that was coupled to a computer TX-2. The device was primitive both in terms of realism and user interface. Generated graphics of Sutherland’s system were very primal wireframe rooms and objects. These objects were shown at the stereoscopic display. The user would also need to be strapped into the heavy device.

Watch the short video about Sword of Damocles here: 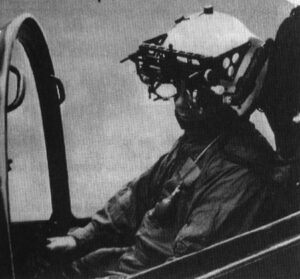 As early as 1979, the military was experimentilizing with HMDs. They wanted to help fighter pilots cope with the increasing elaboration of the fighter jet technology. Some of the peculiar problems that they were trying to solve included how to use the head to aim during shooting, how to show information from imaging sensors on virtual displays, and how to make the systems less complicated to understand and handle.

Thomas Furness, VR/AR pioneer, had a background in creating visual displays ascending to 1966.  He succeeded in fundraising for a prototype system to be fabricated at Wright-Patterson Air Force Base, Ohio. The Visually Coupled Airborne Systems Simulator (VCASS) was presented in 1982. Test pilots put on the Darth Vader helmet and sat in a cockpit mockup. 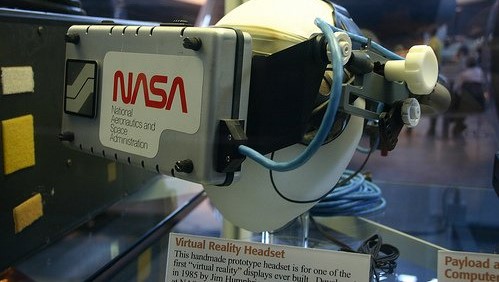 In 1981 Michael McGreevy (NASA’s Ames Research Center) began a research program in dimensional information transfer at NASA, accentuating the interpretation of 3-D displays. Aware of innovative HMD work by Sutherland, McGreevy put forward a proposal in 1984 to craft a resembling system for NASA called a virtual workstation. Researchers at NASA charged with creating an affordable pilot training system for manned space missions. In the issue, they developed the Virtual Interface Environment Workstation (VIEW). It was the first system that combined computer graphics and video imaging, 3-D sound, voice recognition and synthesis, and an HMD. The system was supplemented by a data glove, that was founded on an invention designed to play air guitar.

The VIEW Project guided the development of many key VR technologies including head-coupled displays, data gloves, and 3D audio technology.

The term “virtual reality” appeared. In this period academic and scientific work concerning the study of VR was carried out. Actually, it was the period of rapid growth along with increasing sales of VR gadgets. 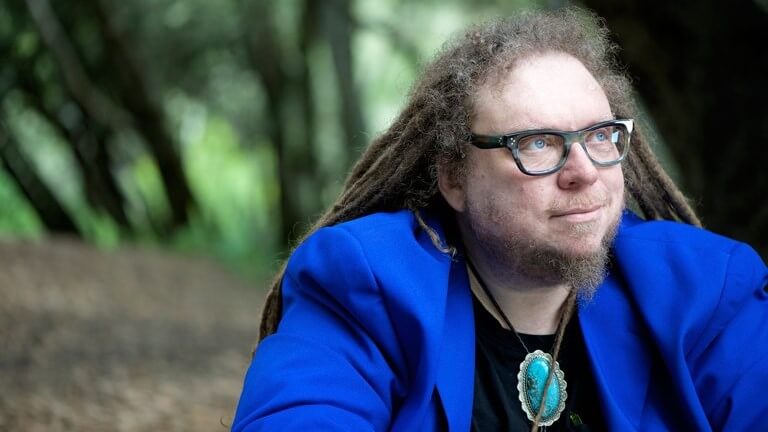 Originally the term “virtual reality” was offered by Jaron Lanier in 1987 upon saturated research activity into this technological form. But before, he had set up VPL Research – a company which pioneered research into VR and 3D graphics which also sold the first VR gear such as VR glasses, data gloves and later, the full data suit. Through VPL research Jaron developed a range of virtual reality gear including the Dataglove (along with Tom Zimmerman) and the EyePhone HMD. They were the first company to vend Virtual Reality goggles (EyePhone 1 $9400; EyePhone HRX $49,000) and gloves ($9000). Data glove was one of the main developments in the area of VR haptics. 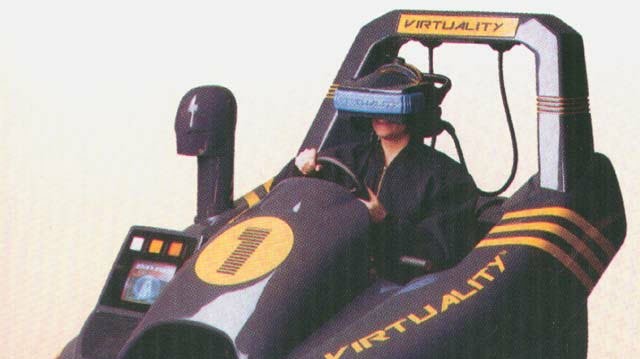 Virtuality is a range of VR gaming machines produced by Virtuality Group and found in video arcades in the early 1990s. The machines deliver real time (less than 50ms lag) gaming via stereoscopic joysticks, visor, and networked units for a network of gamers.

There are two types of units. In the first one the player stands up (SU) and in the second he sits down (SD). Both unit types use VR headsets (the “Visette”). Each of them contains two LCD screens of 276 x 372 resolution each. Four speakers and a microphone were integrated into the unit. Using the magnetic tracking system a stereoscopic display was able to react to head movements to vary the display based on what the player would be “looking at” in the game. The position of the joystick controls a movement of a player’s “virtual hand”, and a button on the joystick propels the player to the game arena. 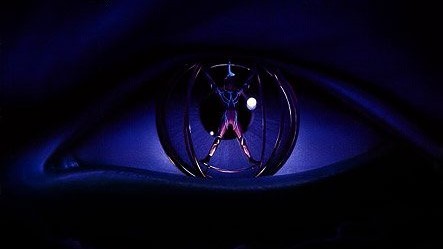 The Lawnmower Man is a 1992 American sci-fi horror film directed by Brett Leonard. The film is named after a Stephen King eponymous short story.

The movie introduced the VR concept to a wide audience. It was based on the Jaron Lanier’s individuality and his first laboratory experience. Lanier was played by Pierce Brosnan, a scientist who used VR therapy on a mentally disabled patient. Real VR installation from VPL research labs was used in the film. 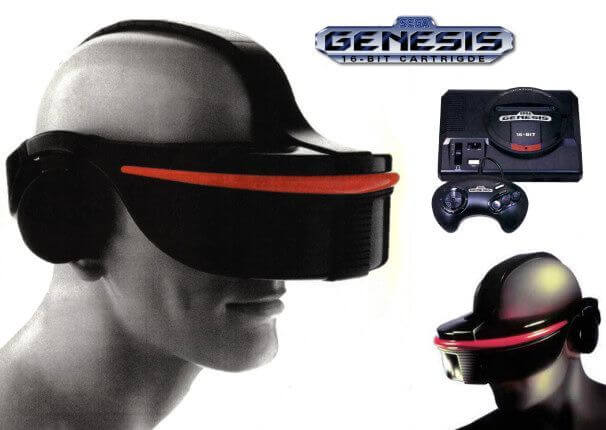 Sega VR headset for the Sega Genesis console was announced at the Consumer Electronics Show in 1993. It was based on an IDEO VR head mounted display with LCD screens in the visor and stereo headphones. HMD also had head-tracking feature.

Versions were designed for arcades and consoles (Sega Genesis and later Saturn), but only the arcade version was released, while the home console versions were set aside.

There are four original illustrious games for Sega VR:

The short video, featuring the introduction of Sega VR on summer CES 1993: 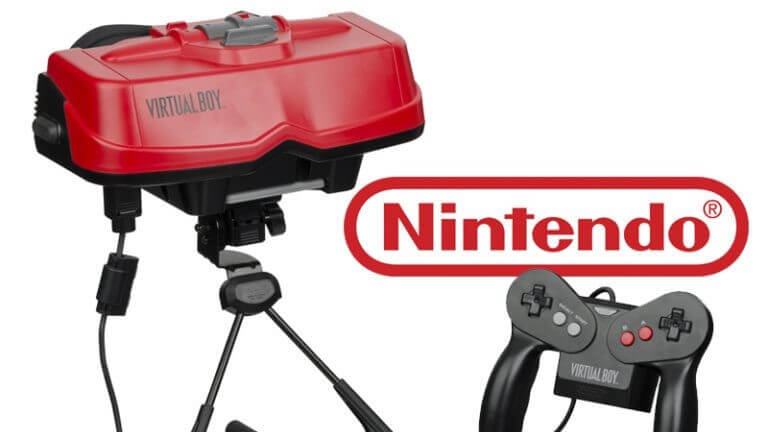 The Virtual Boy, also known as VR-32, is a 32-bit table-top 3D video game console developed and made by Nintendo. VB was sold out as the first “portable” video game console showing “true 3D graphics” out of the box. It was released in July 1995 in Japan and in August 1995 in North America at a price of about US$180. It was recognized as a commercial failure and was not released anywhere else despite price drops. Only 770 000 units were sold out.

The reported reasons for this failure were a lack of colour in graphics, lack of software support and inconvenience of using the console.

Creators initially demonstrated 3 games for the Virtual Boy. Nintendo planned to release 3 titles at launch, and 2 or 3 per month thereafter. Nevertheless, only 22 games were released. 19 of them were released in the Japanese market and 14 games – in North America.

Today you can purchase new Virtual Boy on Amazon.